The recently released IoT Investments & M&A Report 2018 shows that overall IoT funding has stabilized at healthy levels. The last 12 months saw $3.3B in total recorded IoT investments. At the same time, successful exits such as Relayr’s recent $300M acquisition by MunichRe are increasing. The total number of acquisitions/exits saw a new record in Q2/2018 (27 in total).

IoT is now past the hype. The numbers indicate that the volume has stabilized in the last 2 years with Q2/2018 showing a 1% IoT investments decrease from Q1/2018 and a 20% IoT investments increase year-on-year. The data is yet another indication that IoT has passed the hype stage. The continuous inflow of money and recent successful exits (see below) show that the value of IoT investments is real.

The 38-page report is a collaboration between postscapes.com and IoT Analytics. It consists of three parts

For the purpose of this report, IoT investments were divided into the 6 IoT tech stack elements: Hardware, Connectivity, Storage & Platforms, Analytics, Applications, Security. Although most funding still happens in hardware, there are examples of successful startups all across the stack. The below picture shows some recent startups such as IoT Platform C3IoT or IoT Connectivity specialist Actility for each tech stack layer.

There are currently approximately 69 recorded IoT mergers & acquisitions per year. For the majority of these acquisitions, the sale price is not disclosed. Q2/2018 specifically saw a new record with 27 deals.

IoT exits and acquisitions surge. The data indicates that exits are sharply on the rise (in Q2/2018). One should consider that the concept of IoT only started to gain widespread popularity around 2013/2014 and investors often have a 5+ year investment cycle. It is therefore expected that there will be more exits and acquisitions in the coming months.

IoT Analytics asked IoT investors who are part of the IoT Analytics Enterprise Technology Panel about their sentiment and outlook for the IoT investments space.

Positive Outlook. All investors rated the outlook as either “stable” (33%) or expect an increase in IoT investments in the coming 12 months (67%).

Among the challenges, investors cited that many IoT startups fail to show a substantial recurring revenue stream. Although some startups make several millions of dollars in revenue, the revenue is often based on project-based consulting fees or through the support of one-time proof of concept (PoC) implementations rather than highly scalable software.

About the report & methodology

The insights presented above are an excerpt of the 38-page IoT Investments & M&A Report 2018 that is available to corporate IoT Analytics Research Subscribers. 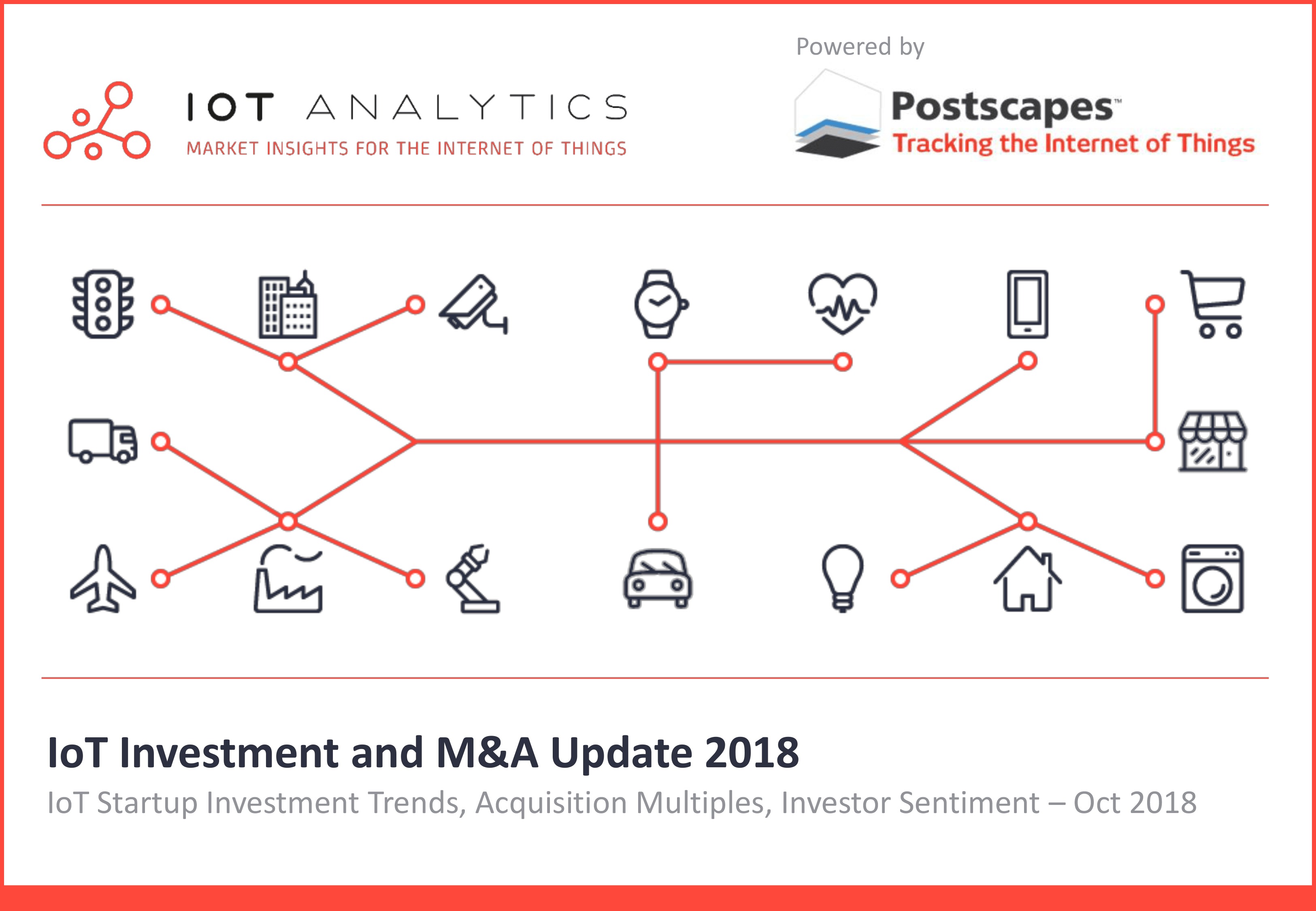 This report provides further answers to the following questions:

The report is based on extensive research and comprehensive market analysis of data sets from January 2017 to June 2018 – mostly supplied by Postscapes. The purpose of the document is to inform interested parties of the state, growth and details of investments and M&A activity in the global IoT Market – through the IoT Analytics research lens. The data provided was validated and classified by IoT Analytics. In addition to collaboration with Postscapes for data gathering, several questions were put to the IoT Analytics Research Panel of Technology Experts made up of investment and M&A industry experts to get their view and outlook on the IoT investment space.

This website uses cookies to improve your experience while you navigate through the website. Out of these cookies, the cookies that are categorized as necessary are stored on your browser as they are essential for the working of basic functionalities of the website. We also use third-party cookies that help us analyze and understand how you use this website. These cookies will be stored in your browser only with your consent. You also have the option to opt-out of these cookies. But opting out of some of these cookies may have an effect on your browsing experience.
Necessary Always Enabled
Necessary cookies are absolutely essential for the website to function properly. This category only includes cookies that ensures basic functionalities and security features of the website. These cookies do not store any personal information.
Functional
Functional cookies help to perform certain functionalities like sharing the content of the website on social media platforms, collect feedbacks, and other third-party features.
Performance
Performance cookies are used to understand and analyze the key performance indexes of the website which helps in delivering a better user experience for the visitors.
Analytics
Analytical cookies are used to understand how visitors interact with the website. These cookies help provide information on metrics the number of visitors, bounce rate, traffic source, etc.
Advertisement
Advertisement cookies are used to provide visitors with relevant ads and marketing campaigns. These cookies track visitors across websites and collect information to provide customized ads.
Others
Other uncategorized cookies are those that are being analyzed and have not been classified into a category as yet.
SAVE & ACCEPT
Powered by