After years of sustained high growth rates, the pandemic and the related economic downturn hit IoT markets. IoT enterprise spending grew 12% in 2020, nearly half of the 2019 growth rate.

However, 2021 is turning out to be a very strong year for companies focusing on IoT, with spending expected to increase by 24%. (Note: This number will be updated with the actual growth in the first quarter of 2022 [Q1/2022].)

The recently released 430-page IoT Use Case Adoption Report 2021 reveals where 200 executives at companies adopting IoT technologies across 48 different use cases are investing their money. A few weeks ago, we highlighted the top 10 IoT use cases right now, based on the analysis. This article focuses on six higher-level IoT adoption trends for 2022 that can be deducted from the same research.

According to the report, 79% of organizations are planning to invest significant amounts of money into at least one IoT project in the coming two years.

In fact, the average large company is planning to invest into nine different IoT use cases in the next two years. IoT for asset/plant performance optimization is the use case that most companies plan to invest in, with 42% of interviewees planning to invest strongly. Not surprisingly, there is a solid correlation between willingness to invest (further) and overall ROI. Among companies that have rolled out IoT tools for asset/plant performance optimization(i.e., tools that allow users to operate and maintain assets at an increased overall equipment effectiveness), 97% have already indicated a positive ROI.

But even use cases that are less mainstream today are expected to see strong increases. More than one-fifth of companies, for example, are planning to invest strongly into augmented reality in operations (augmented operations).

The picture is obvious: all signs point to an increased adoption of IoT technology in the coming years.

IoT adoption trends – Takeaway for 2022: IoT topics will continue to exhibit strong double-digit growth across a large number of end markets, use cases, and enabling technologies.

Trend 2: Use cases that focus on improving operations and assets are on the rise.

While IoT adoption is strong across the board, asset and operations-centric use cases seem to be in highest demand (compared to use cases for a company’s supply chain or smart connected products sold to customers).

On top of the use case labelled IoT for asset/plant performance, the IoT-based process automation use case (i.e., using real-time data from connected assets to improve an entire operational process) and the predictive maintenance use case (i.e., increasing asset utilization by forecasting unplanned asset downtime) are likely to see strong investments in the coming two years.

A core theme fueling these asset-centric use cases is that of retrofitting. Companies are connecting existing, years-old infrastructure and assets and performing software-driven optimization.

IoT adoption trends – Takeaway for 2022: Companies are focusing on the software-driven modernization of older assets.

In 2017, Cisco famously reported that 60% of all IoT projects are failing, with only 26% of companies reporting an IoT project that was a complete success. Organizations are still citing the 2017 study in 2021, although the reality on the ground has changed.

Out of the approximately 1,600 IoT projects in our analysis, 79% returned a positive ROI. The leading use cases resulted in a positive ROI for 98% of companies.

Despite the complexity of many IoT projects (see Trend 6), a number of inhibitors to widespread IoT adoption have been reduced, most notably costs. Prices for hardware have decreased (e.g., the average cost for sensors fell from about $1.40 in 2004 to less than $0.50 in 2020). Software has also become cheaper. Thanks to IoT platforms and cloud services, companies can now procure many required software elements in a modular fashion and via pay-per-use, which allows for costs to increase with usage.

The IoT talent shortage is expected to remain an ongoing challenge for years to come. But as many integrators have built specific IoT business units (our recent analysis found more than 700 active IoT integrators), a solution for that challenge is now available.

IoT adoption trends – Takeaway for 2022: The question adopters are asking has shifted from “Will IoT deliver a positive ROI?” to “Which IoT solution or use case will deliver the highest ROI?”

Interested in additional data on ROI for the IoT?

Trend 4: The gap between adoption leaders and laggards is widening.

One might think that companies that have not started their IoT journey will now wake up and close the gap with those that have already adopted.

Our data show the opposite. Companies that have invested heavily into IoT in recent years are increasing their investments even more than the adoption laggards. The gap between the leaders and the laggards is therefore widening and not closing.

The automotive industry provides a suitable example of this trend. In 2012, Tesla became the first car company to introduce over-the-air (OTA) updates for its Model S. (Note: OTA is one of 13 IoT use cases classified under the label of smart connected products)

In the nearly 10 years that have passed since, the company has invested heavily, so that today the entire fleet receives consistent and reliable OTA updates. These updates include major feature updates that increase the value for the end user (e.g., environment monitoring, dynamic brake lights, and an onboard music studio).

While Tesla doubled down on this IoT use case, many competing car makers have not even started on this journey. It is reported that, in 2021, major players, such as the FCA group (which includes brands such as Chrysler, Dodge, and Fiat), only provide firmware updates for infotainment systems and no major remote updates to core software.

Tesla’s commitment to OTA and other IoT use cases may pay off: OTA enables new methods of monetization, and Capgemini predicts that the share of car makers’ revenue that comes from software will increase strongly in the next decade.

IoT adoption trends – Takeaway for 2022: Look for further IoT success stories from companies you may have heard from before, not those that have been silent in recent years.

Trend 5: APAC is catching up to North America and Europe.

In recent years, IoT adoption has been higher in North America and Europe than in APAC. But the picture is shifting, and countries in APAC (and not only China) are catching up.

In our latest research, the average large company in Europe or North America indicated plans to invest strongly into seven different IoT use cases in the next two years, while companies in APAC plan to invest into 13 different IoT use cases. Companies in China, India, Korea, or Vietnam are increasingly focused on digitalizing their business models and leapfrogging from labor-intensive production to high-end manufacturing. China is leading the pack, in part because of strong governmental support. But countries including India, Korea, and Vietnam are trying to catch up.

“We will strengthen the innovation drive, continue to improve the industrial ecology, accelerate the construction of new infrastructure for IoT, and deepen application services in key areas.” – Wang Zhijun, Vice-Minister, Ministry of Industry and Information Technology, China, 23 October 2021

Interested in getting a better picture of regional IoT markets?

Trend 6: The complexity of IoT projects remains a major challenge.

IoT projects can be complex, and this complexity remains a major challenge for IoT adoption.

A lot of efforts have been made by vendors in recent years to simplify IoT. This includes developing ready-to-use solution templates, zero-touch provisioning device connection tools, and pay-per-use payment models for software and hardware. Vendors have also introduced modular software components that can be used on a needs basis and include connectors to other popular applications.

However, end users in our research still point to complexity as the biggest pain point. Therefore, it is not surprising that the most common advice for getting started with IoT is to perform proper testing and ensure proof of concept before rolling out the solution to the organization or customers. This points to the complexity of IoT use cases: you do not know what you do not know.

IoT adoption trends – Takeaway for 2022: “IoT made easy” still does not exist—proper planning and preparation remain key, even if some marketing slogans suggest the opposite.

Interested in getting the full picture on IoT challenges and pain points?

Are you interested in learning more about  IoT Use Cases?

The IoT Use Case Adoption Report 2021 is a comprehensive 430-page report examining the adoption of 48 IoT use cases across 4 types: smart operations, smart supply chain, connected products, and connected transport. It includes the adoption (by region/country, industry), a detailed breakdown of spending, ROI per use case, key vendors & vendor satisfaction, as well as best practices and lessons learnt. It is part of IoT Analytics’ ongoing coverage of IoT in general. 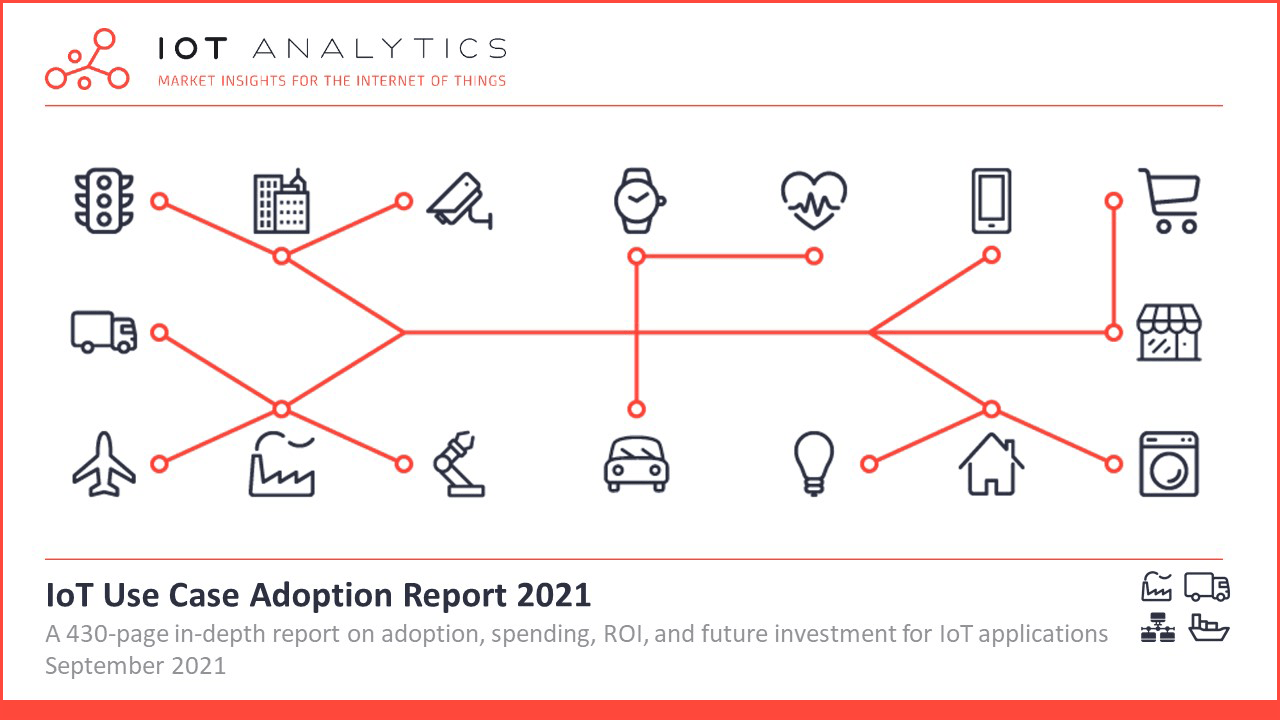 This report provides answers to the following questions (among others):

The sample of the report gives you a holistic overview of the available analysis (outline, key slides). The sample also provides additional context on the topic and describes the methodology of the analysis. You can download the sample here:

Global IoT spending to grow 24% in 2021, led by investments in IoT software and IoT security

The top 10 IoT Use Cases

Subscribe to our newsletter and follow us on LinkedIn and Twitter to stay up-to-date on the latest trends shaping the IoT markets. For complete enterprise IoT coverage with access to all of IoT Analytics’ paid content & reports including dedicated analyst time check out  Enterprise subscription.

Philipp is a principal analyst focusing on quantitative analysis, surveys and market models. He has a background in Economics and market research.
← Previous Post Next Post →